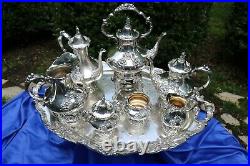 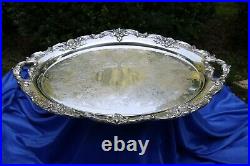 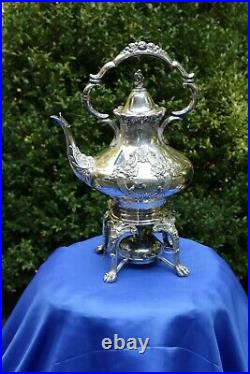 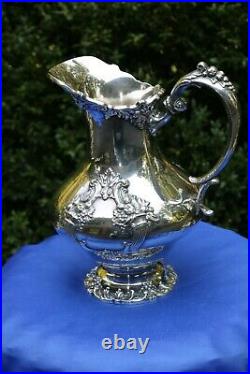 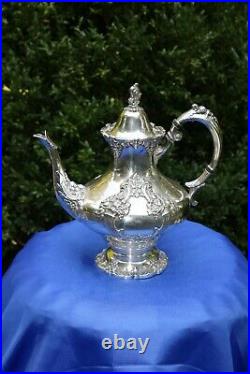 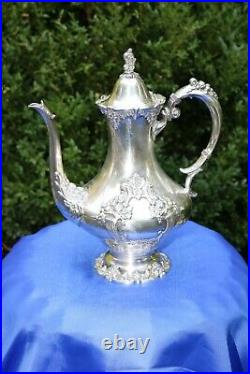 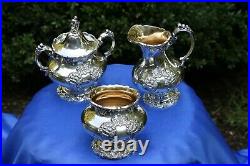 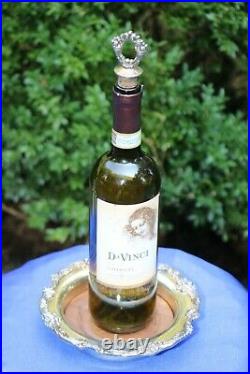 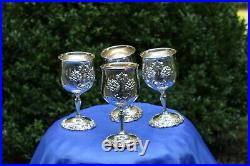 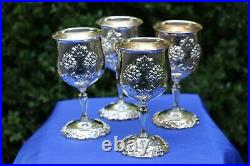 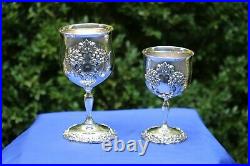 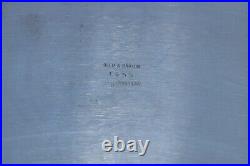 Amazing King Francis Silverplate 8 Piece Tea/Coffee Set. W/ Goblets & Extra Pieces. Attention: Serious Collectors, E. Vent Planners, Restaurants, Caterers, Major Event Venues, Museums, and Event Rental Services for – Weddings, Anniversaries, Awards, Retirement, and such occasions. While researching Reed & Barton, the King Francis design, and all the history involved with the pattern, it became a favorite mine. First, I learned how rare the design actually is, and secondly, I learned that with its age many pieces I found were either heavily worn from usage, damaged, or had been repaired; and lastly that true bargains were even rarer. I felt that a nice collection, of quality pieces, at a fair, reasonable price would be of interest to people. I have been working towards that goal for the 4-5 years. While every piece in this collection is used and shows the usual, normal signs of usage, to my knowledge none have dents serious scrapes, loss of plate, or have been repaired. Over the years I have personally polished each piece (several times) so I could see its true, actual condition. While I could not show the Read & Barton inscription on each piece, I have shows a few in the photos. I assure you that each has the R & B inscription, the style #, and some still have the blue R & B sticker. Eight Piece Tea Set – Item #’ 1650, 1651, 1652, 1653, 1654, 1655, 1657, 1658. Four 6.5″ Water and Four 5.25″ Wine Goblets – Item #’s 1659 & 1662. Wine Coaster /w wood liner, Wine Bottle Cork, Trivet – Item #’s 1695, 1624, 1644. One jar of my favorite polish and a polishing cloth. I will, of course be willing to drive a reasonable distance to either deliver the collection or meet you to transfer them into your vehicle. One issue to be aware of – the burner/heater on the rare, large Coffee Kettle/Urn has some loss of plate due to the heat and repeated polishing. When in place in the Kettle Stand the plate loss is not visible. If you already have a Tea Set, check out my other listing of 22 King Francis serving pieces that would complete your collection and substantially increase its value. All the pieces are high quality and would compliment your Tea\Coffee Set. Multiple images of each piece or all the hallmarks – be assured all have the proper hallmarks and Style number. The sunlight changed during the photo session so the lighting changed some during the period. So please study the photos carefully, these items are what you would be purchasing. Thank you for looking! If interested, the following is a brief history of the Reed & Barton Silver Company. In the early 1800’s Henry G. Reed and Charles E. Barton, friends and fellow craftsmen, cam to work at the firm of Babbit & Crossman. They renamed the firm Reed & Barton and continued to grow the firm. Its products included sterling silver and silverplate holloware and flatware as well as other similar items. The new company was successful and grew rapidly as did it reputation for quality. Reed & Barton maintained its headquarters in Taunton, MA which is known as “Silver City” because of the high number of silver companies which were based there. The company produced many varieties of Britannia and silver products through the rest of the 19th and throughout the 20th Century and into the 21st Century! During the American Civil War, Reed and Barton produced a considerable quantity of weapons for the Union Army. After Barton died of a heart attack in 18678 Reed carried on, but as a tribute to his longtime friend he decided to retain Barton in the company’s name. Ownership of the firm would be passed down through the Reed family for multiple generations. In 1928, Reed & Barton merged with the silversmith frim of Dominick & Haff and continued to hold its place as one of the premier silver product manufacturers in the world. During the rest of the 20th Century the company bought others and was itself bought several times. However, the name Reed & Barton continued to be used and known as the maker of high-end silver products. In recognition of this, Reed & Barton was chosen to design the produce the official gold, silver, and bronze medals for the 1996 Summer Olympics in Atlanta of which there are samples on display at the Old Colony History museum in Taunton. The company’s products are at the White House in Washington, D. The company continued to operate a factory store at the plant site and an online store as well. Reed & Barton filed for Chapter 11 bankruptcy in February of 2015, citing ongoing pension liabilities and decreasing revenue. The Lenox Company continues to sell products under the name of Reed & Barton. The item “Reed & Barton Silverplate King Francis 8 Piece Tea/Coffee Set+8 Goblets & Extras” is in sale since Sunday, October 4, 2020. This item is in the category “Antiques\Silver\Silverplate\Tea/Coffee Pots & Sets”. The seller is “things-past” and is located in Johnson City, Tennessee. This item can be shipped worldwide.